The Met - Upsetting The Apple Cart

From my regular contributor.

In October 1999, John Stevens, then Deputy Commissioner of the  Metropolitan Police (MET), gave a high profile address at the 9th International Anti-Corruption Conference in Durban.  His speech was entitled 'Integrity is not negotiable'. (here)

Of MET corruption he said,


Concerns were again raised about five years ago, when our criminal intelligence branch noted that several of our major crime operations had been compromised, and intelligence suggested that corruption had been a major factor. This gave an uncomfortable indication that organised crime had infiltrated our ranks.
We now realise that while we did deal with the "rotten apples", the approach did not destroy the tree from which they had been picked. This meant that a new batch of rotten apples could grow in another season.

Within a few months Stevens was appointed MET Commissioner, serving 2000-05.  With his 'rotten apples' speech heralding then a new era of integrity, how did his tenure of leadership leave the MET five years later?

When his successor Ian Blair took over in Jan '06, this was the MET Management Board that he inherited from  John Stevens: 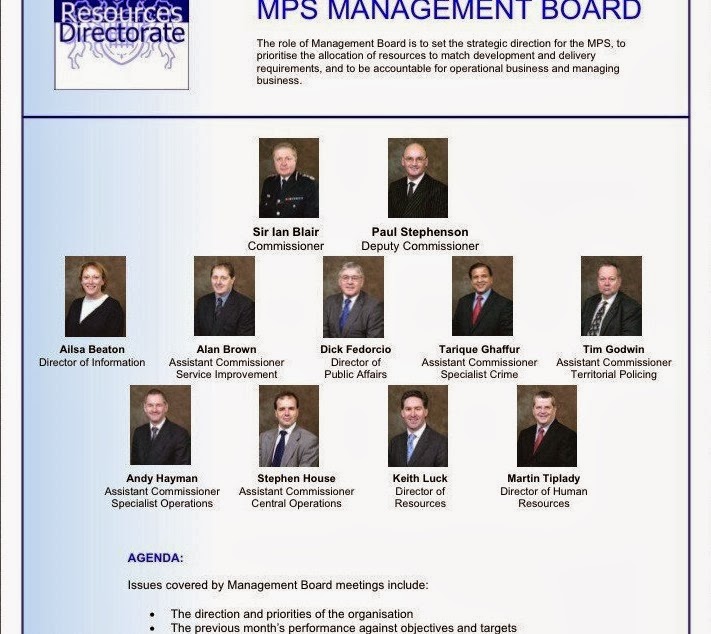 It was reportedly a troubled Management Board - divisive, riven with rivalries, prone to press briefing against its own leader Commissioner Blair.  Striking too is just how many of outgoing Commissioner Stevens' 11-strong Management Board have had their professional lives touched in some way by the subsequent Hackgate scandals -  a total of seven (plus another senior officer about to join the Board)

IAN BLAIR
Blair was appointed Commissioner in Dec 05. Blair's term of office coincided with the original phone hacking investigation into Clive Goodman and Glenn Mulcaire, Operation Caryatid ('06-07).  He resigned in 2008 as the Mayor of London, Boris Johnson, openly expressed he had no confidence in Blair's Commissionership. Throughout, Blair is alleged to have been subject to adverse press criticism as a result of senior colleagues briefing against him.

DICK FEDORCIO
Fedoriwas questioned closely at the Leveson Inquiry about leaks to the press from the MET Management Board - he denied being the source of the leaks.  Following Hackgate disclosues, Fedorcio resigned on the announcement that the Independent Police Complaints Commission were to instigate proceedings against him for gross misconduct. (here)

TIM GODWIN
When Temporary Commissioner in Jan '11, following significant new information provided by News Corp's Management and Standards Committee, Tim Godwin authorised the start of Operation Weeting. Its focus was to investigate allegations of widespread voicemail interceptions by the News of the World.

STEPHEN HOUSE
House joined the MET as a Deputy Assistant Commissioner in 2001.  In 2005, he was appointed to Assistant Commissioner, first in Central Operations and then heading Specialist Crime Directorate.  In 2007 he took up post as Chief Constable of Strathclyde Police and, in October 2012, he was appointed as the first Chief Constable of Police Scotland.  As such, House is ultimately responsible for Strathclyde Police's ongoing Operation Rubicon.  It is the investigation into alleged perjury by News of the World staff regarding Tommy Sheridan, and the wider consideration of alleged hacking of Scots victims.

MARTIN TIPLADY
Tiplady was criticized by the Independent Police Complaints Commission following an IPCC investigation into the involvement of members of the MET Management Board in the employment of an immediate family member of a former News of the World executive. By the time of the IPCC Report in March '12 Martin Tiplady had resigned from the MET.  The critical Report said, "Despite Mr Tiplady’s claimed lack of direct involvement, the evidence suggests that the overall responsibility for this lack of adherence to policy rests with him. In a written response to the IPCC dated 6 February 2012 he accepted 'that it might be possible to criticise me for not ensuring that staff properly followed recruitment guidelines'. ”  (para 76 here)

[For absolute clarity, the Report made clear that there was no suggestion the relative of the News of the World executive in question, who assisted by meeting investigators and providing a statement, acted inappropriately in obtaining employment with the MET.]

PAUL STEPHENSON
Stephenson succeeded Ian Blair as MET Commissioner in 2008. In July '09, it was Commissioner Stephenson who tasked John Yates with establishing the facts surrounding the Guardian breaking the story of more widespread phone hacking than was evidenced by Operation Caryatid.  Stephenson resigned in July '11 "as a consequence of the ongoing speculation and accusations relating to the Met's links with News International at a senior level "

By mid 2007 the MET Management Board looked like this:

JOHN YATES had by now joined the Management Board.  Included in his portfolio was the Directorate of Professional Standards - motto 'Integrity is non-negotiable'.

[As an aside, Stephen Rimmer became Interim Chair of the Serious Organised Crime Agency in 2013, at the time when SOCA was embroiled in controversy over Operation Millipede.]

Just as Ian Blair started his Commissionership, two key reports were authored - one very likely reached the Commissioner's desk, the other certainly did not.

The first was authored by JOHN YATES. Dated 31 January '06, It ran to "53 pages and 316 paragraphs", and comprised an assessment for the re-opening of investigations into the murder of Daniel Morgan (see here). "The MPA [Yates] report, as it has been called, went on, amongst other things, to make numerous criticisms of the first investigation into the murder, to refer to the loss of exhibits and exhibit books since that investigation and to point to deficiencies in the evidence obtained."  (pp36-37 here)

The second, dated April 2006, was submitted by an officer working on the phone-hacking enquiry, and it appears to have been withheld from Commissioner Blair. First reported by James Cusick and Cahil Milmo
in the Independent (Apr '12), they called it "a suppressed police-intelligence report which outlines allegations that a senior Met manager set out to cripple his own Commissioner...the report contains incendiary claims that the Met's eight-strong management board was 'compromised' – effectively no longer secure – with intelligence details from a reopened murder investigation being passed out of the Yard along with material reflecting a civil war inside the Met's upper echelons" (here)


The former commissioner first learned of the report when a whistleblower handed it to him in December 2011 at the height of the Leveson Inquiry.  When he learned that Met anti-corruption officers had intelligence to suggest his senior team had been compromised six years earlier yet told him nothing about it, Lord Blair visited Scotland Yard... Lord Blair, who led the Met between 2005 and 2008, asked his former colleagues to investigate the allegations, find out who knew about the security breach and discover why he was not told.

This Evening Standard report by Tom Harper subsequently prompted questions to Sir Brian Leveson about his 'gagging' when he appeared before the Culture, Media and Sport Select Committee in Oct '13.  (here)

Leveson was clearly unable or unwilling to be drawn on the issue of the MET allegedly serving a Public Interest Immunity (PII) certificate.

Nevertheless, his responses to relevant questions do reward closer scrutiny, particularly in light of an intriguing intervention from Chair of the CMS Select Committee, John Whittingdale


Q829 Tracey Crouch: The Evening Standard reported that a former Metropolitan Police Commissioner handed a very serious report to your inquiry...which the Met then claimed a public interest immunity over. This then prevented you from referring to it in public or considering it for the conclusions of your report...My understanding is that there was an application for public interest immunity for a particular document... given to you by a former senior police officer alleging corruption... a certificate was issued, which was reported in the Evening Standard, and that, as a consequence of that certificate, you were unable to consider it as part of your recommendations on the relationship between the police and the press. Of course, that is a matter that is of great interest.
Sir Brian Leveson: "I am sorry, this question has - [long pause]
Tracey Crouch: Flummoxed?
Sir Brian Leveson: No, that is not - "
John Whittingdale (Chair) then intervened, "Sir Brian, I begin to get nervous when we talk about matters that should be or could be the subject of criminal action. I rely on you as rather better informed than me to warn us if we are straying into areas we should not.

Q833 "Tracey Crouch: I will curb my questions on that matter... Given my previous question and given ongoing concerns, not to mention the Daniel Morgan case that you reference once in your report, do you think the Met Police were, in fact, the right police force to conduct the current operations into journalist activities?"
Sir Brian Leveson: "I am not going to comment on that. I do say, which reflects a little bit on your last question, that there were some relationships between the press and very senior officers of the Metropolitan Police of which I was critical, of which you will be aware.
I did not go into too much detail, for reasons that the Chairman has just identified.
The circumstances surrounding the revisiting of Operation Caryatid in 2009 and 2010 are analysed - again I use the adjective tedious - at great length in my report, and the circumstances of the reopening of the investigation in January 2011 are also identified. We are still seeing the consequences flow through the system."

So it might be that the fallout from Hackgate is not over.  John Stevens assertion in Durban in '99 that "while we did deal with the 'rotten apples' the approach did not destroy the tree from which they had been picked" may have been prescient.   His legacy in the form of the MET Management Board he bequeathed to his successor might yet be tested against his yardstick of integrity being non-negotiable.
Posted by Brown Moses at 07:56